Akram Khan’s new dance piece is a boldly dark reimagining of Rudyard Kipling’s much-loved family classic, Jungle Book, and is presented as part of the Birmingham 2022 Festival, in anticipation of the Commonwealth Games coming to the city, and in association with Birmingham Hippodrome. Indeed, this is an impressive co-production with and for theatres around the world (see below).

And it is the world and what humankind is doing to that world that is the central concern of this work. The programme note explains this well: In a near future world, a family is torn apart as they escape their homeland ravaged by the impact of climate change. Arriving alone in a deserted modern city, and with wild animals claiming the streets as their own, the child [Mowgli] soon discovers unlikely allies in this strange new jungle.

The original score by Jocelyn Pook, with sound design by Gareth Fry, is well-crafted, although – like the production as a whole – it is mostly dark, serious and set in fairly depressive tonal colours. However, the music cleverly accompanies the astonishing, line-drawn animation and visuals by YeastCulture, and the challenging choreography by Khan.

The interplay between the ten outstanding, international dancers and these visuals is quite extraordinary. For instance, there are two occasions when Mowgli strokes the trunk of a projected, enormous line-drawn elephant, and we really believe that this (mostly mute) child really is stroking the trunk of a real elephant; Mowgli even ducks to avoid the elephant’s tusks! Delightful.

This merging of animated graphics with real-live actor-dancers on the stage,  is wonderfully done, and this, together with a voice-over script (superbly narrated by actors), and with the powerful music, creates a sense of something  cinematic.  Indeed, one thinks of Wagner’s use of the term Gesamtkunstwerk  here, meaning a total work of art or a consummate artwork/integrated drama. For Wagner, he found this in what he described as the clearest and most profound expression of folk legend, and Khan’s reimagining of Jungle Book, as a tale most of us know from childhood, rather fits this bill.

However, this is not an easy work for any children & families in the audience. Indeed, in the performance I attended, there were a lot of children and families who had come to what they clearly thought a jolly, easy-to-understand presentation of the classic story Jungle Book, albeit reimagined. With a few exceptions, there really aren’t any laughs in this reimagining of the story. The music, lighting & set is mostly very dark and gloomy; the costumes – everyone in red vests and grey pants – dull; the vast majority of the dancing, crunched-up, hugging the stage and often very difficult to see or make sense of, and; for all the intrinsic value of a very excellent script in voiceover, this tended to have the effect of creating a barrier or disconnect between the audience and the action. Sadly, many families with children left at the interval.

The publicity material for this work suggests a 10+ age guidance; that it deals with the serious subject of climate change through dance, animation, and, to quote; a visual technology [that] will turn the stage into a magical world that dives into the myths of today, this really is a very serious piece of work, not really suited to families and children perhaps looking for a more traditional telling of the story of Jungle Book.

Having said that, there were three particularly beautiful sequences in Khan’s choreography, one in the first act and two in the second, which got the dancers away from seemingly hugging the stage on their haunches all the time, and into upright, exquisitely flowing dance routines. The picture below gives you an idea of the beauty of these three sequences, and I can’t help feeling that most of the audience would like to have seen more of this kind of lyric beauty. 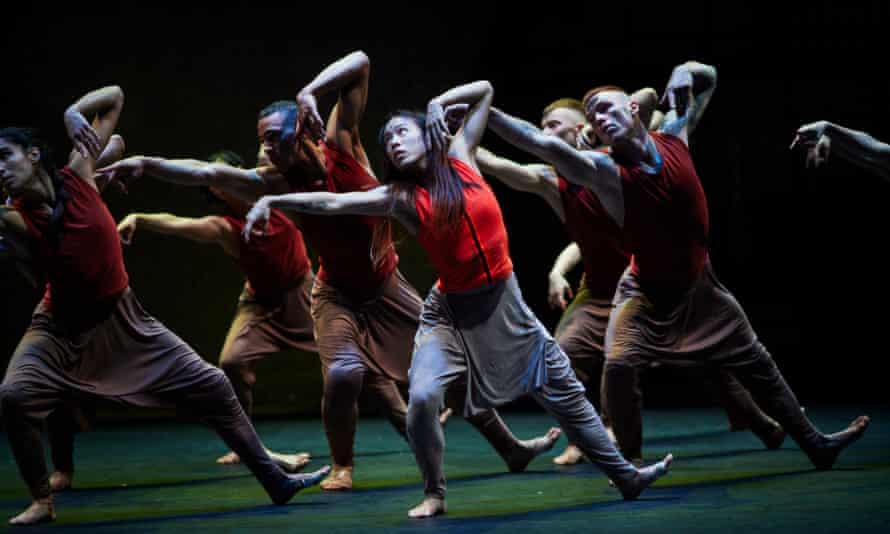 This is a work with a serious, post-apocalyptic message here, and it is the world’s children who are at the forefront of asking the world to wake-up to the climate crisis facing us all.