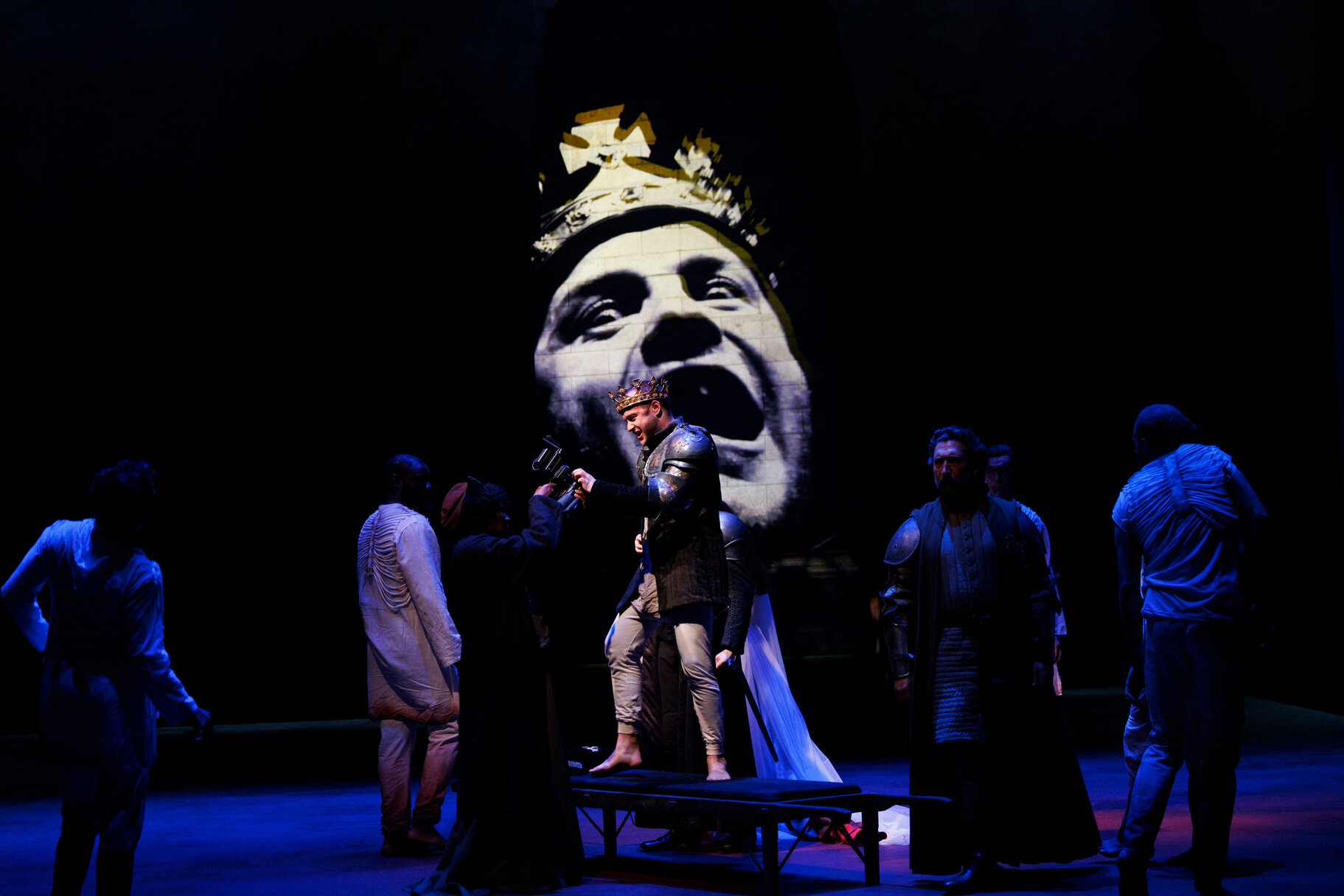 This is a taut, emotion driven performance presenting a world akin to a gyroscope – if it stops spinning it will topple.  Which it does, of course.

Once side of the gyroscope sits Richard and his supporters, the other side is a powerful group of women, at the head of which is Queen Margaret.  The unbearable tension between the two factions holds the world in a fragile balance, but also eventually destroys it.

Arthur Hughes’s Richard is driven by his desire for the top job, his reaction to each situation he creates, creates the next situation.  Hughes gives us a passionate spontaneity; this Richard is terrifying because unpredictable.  But this is not a one-note Richard; Hughes gives us a carefully crafted journey, a character becoming darker and darker as he moves towards his own destruction.  He also has a deft comedic touch.

Productions are ephemeral, good productions reflect our contemporary world.  It struck me, watching this Richard work through his preposterous proposal to marry the young Elizabeth, that he is a personification of Boris Johnson.  Both Richard and Johnson are narcissists they totally believe, one hundred per cent, their own statements – no matter how ludicrous.  From this belief stems their unstoppable drive.

The women (Queens Margaret and Elizabeth, The Duchess of York and Lady Ann) maintain total believability in their high octane scenes; they are carefully delineated.  Their sparring as enemies only serves to reveal the kinship they share as survivors of mirrored tragic experience.  They are given weight, in Gregory Doran’s pared back production; they exist as people, but also as a chorus, commenting on the plot, even summarizing the present moment as the story moves along.

This is Gregory Doran’s final production as RSC Artistic Director.  It bears his hallmark; deep, deep understanding of the text coupled with a brilliant ability to enable his cast to absorb and embody that detail.  I hope we have not seen the last of Doran’s productions.

Brimson Lewis (Designer) has designed a sparse set, which, combined with the production tone, enables the drama to shine through with dynamism.

These large plays are not easily Audio Described.  However, the AD is given with speed, subtlety and sensitivity.  On a few occasions, perhaps, a little too much detail; nevertheless, it is superbly executed.